chapter from Yes I do & I did it

In church, I had memories of times long gone, and I just stood there. I refused to sit down while trying to connect with God. Who can connect to God sitting down? I thought. We rise and shine in his image. I always made a cross with my left hand, and my father named me The Orthodox, like the Russians. The statues in the church intrigued me, and I used to draw them in my father’s notebook. I was always making drawings, and no pen or paper was safe around me.

I was often told the story that, when I was a little baby, I made my first drawing on a piece of carton while they were changing my diapers. The pencil was stuck between my toes, and people enjoyed how I would make drawings with my toes. I even smuggled pens in bed so I could write on the wall. I had severe eczema, so my hands were tied to the bedpost to avoid scratching myself. Luckily, I could draw with my feet on the angled ceiling above my bed.

My sister often had to explain in school why the moon and Saint Nicholas and his boat were on her report card. Lots of official documents had the same drawings over and over again: the man with the long white beard holding a golden sceptre and standing on the boat that came straight from Spain. Maybe I had an early way of making vision boards. I did end up working as a shipping agent and going on board many ships. The holy man stood for what I knew to be good and spiritual in my early days. He seemed abundant to me, because of his golden sceptre and the big bishop rings he had on his fingers. He came from overseas, and I was always drawn to travelling and going overseas. Although I ended up travelling a lot, it was mostly in airplanes. I am not fond of travelling over the water as the motion sickness often sticks up its ugly head.

The moon and sun were two other favourites of mine and had to be drawn on every surface that would allow it. I adored both and would follow the moon at night from the back of our car. I was amazed how it would always follow me home. It made me feel blessed. 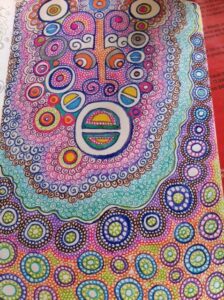 years later when, in regression, I saw myself in a past life as a man of the church. I had this long beard and very angry face. I was a main driver of a split in the Orthodox Church and had a big fight with my best friend over it. I took a heavy candelabra smashed his skull in.

I still carried that guilt of killing my best friend over a religious argument, and I still, for the same reason, dislike organised religions. Even only yesterday, I was asked if I was Russian. It is amazing how we can carry through characteristics from past lives into the next one.

After I had the regression, I had serious doubts that what I had just experienced was merely a nightmare or more. So I looked up the Orthodox Church and the year I thought my past life took place, and it explained that there was a big split in that religion. Two different opinions had to split ways. It suddenly all made a lot of sense, and, at the same time, it was scary to realise these things make sense.

It is easier in the beginning—when we try to awaken to the spiritual side we have inside us—to ignore it and see things as a coincidence and forget them as soon as we experienced them: freak stuff from nature. To keep on living with them as a part of my daily reality took a lot of courage and getting over myself. I was so self-conscious about what others would think about me when I would say, “Guess what? In my past life I had this same experience, and that is how I handled it. So now I want to handle it differently.” They would for sure laugh at me and call me crazy, a lunatic with lots of imagination and fantasy stuff happening in her head.

But after lots and lots of serendipities, regressions, and messages from deceased people, there comes a day when one has to admit it is part of their reality, just as the sun and the moon. I mean I can’t explain how the radio waves travel through the air, but I know how to get music out of a radio. It is the same with the Reiki I practice or other healings that I see happening. I can’t explain it, but I can see the result. I improved my eyesight with EFT, short for Emotional Freedom Techniques. A technique that consists of tapping with two fingers meridian points on the body while saying affirmations. I don’t know how it works, but it did in my case.